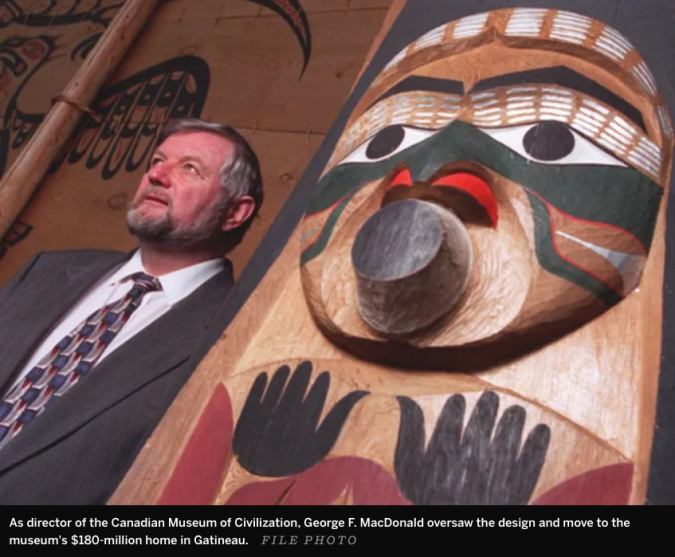 If there is one place at the Canadian Museum of History to feel the presence of George F. MacDonald, it’s among the totems and longhouses of the museum’s Grand Hall.

Anchored by Haida sculptor Bill Reid’s plaster cast for his iconic Spirit of Haida Gwai, the Grand Hall highlights the art and craftsmanship of the West Coast First Nations MacDonald so admired. MacDonald, who spent 36 years at the museum and was its director from 1983-1998, died last Wednesday in Ottawa. He was 81.

“Those exhibits in the Grand Hall just add so much power to the place,” said architect Douglas Cardinal, who worked with MacDonald to build the capital’s showpiece museum, then known as the Museum of Civilization. “George was open to exploring all possibilities and he brought out creativity in everyone around him. It meant that you reached for the stars when you were solving problems. George would appreciate that and support you.”

Born in 1938 in Galt (now Cambridge), Ont., MacDonald studied anthropology at the University of Toronto and Yale University before being hired in 1964 at Ottawa’s Museum of Man in its castle-like building on McLeod Street. When the museum was split into two distinct collections — anthropological and natural history — MacDonald oversaw the construction and move to the newly named Museum of Civilization’s $180-million building in Gatineau.

The move was controversial, and not just because of its $11-million cost overrun. MacDonald unabashedly pushed what critics called a “Disneyfication” of the museum, using interactive displays and computers to immerse visitors in a new kind of museum experience. MacDonald insisted the museum have an IMAX theatre and in 1994 made it one of the first museums in the world to launch its own website.

”Disney is the epitome of popular culture and therefore thought to be anti-intellectual” MacDonald told former Citizen arts reporter Nancy Baele in 1987. “But people should realize the master plan for Disney includes circulating cultural treasures from European and American museums, like the Metropolitan Museum in New York and the Louvre. The intention is that in the future, people will think of Disney as a cultural broker rather than Mickey Mouse’s father.”

Not everyone agreed with the man who some called “Dr. Disney.”

“It’s a total bust,” historian James Axtell told the Citizen in 1989. “You learn nothing. Museums are built on artifacts and there are no artifacts to speak of in it. It’s a flawed philosophy that would assume the past and the present are so alike that you don’t really need to explain it.”

“He took a lot of blowback over that,” Baele said in an interview. “At the time, most museum still kept their displays behind glass panes.”

MacDonald acknowledged the criticism in an interview with the Citizen when he retired in 1999.

”It was a bit lonely, with all the press criticism we had at the beginning. But no museum had a choice if they wanted to survive in this media-savvy world. People now demand good storytelling and good production values. Museums that can comply prosper, and we have prospered.”

Mark O’Neill, the current director the Museum of History, called MacDonald a “visionary” and said much of the criticism was unfair.

“Dr. MacDonald’s vision was for a  museum without walls. He was contemplating a virtual museum that anyone in the world can visit. In those days when it came to the ‘immersive museum experience’ it was cutting edge.”

With 1.2 million visitors a year, the Museum of History has become the most popular museum in Canada.

He was a lifelong collector. He established his first museum in his bedroom when he was eight, said his daughter, Christine Doherty MacDonald. His personal library at the farm in Cantley, Que., where he had lived for half a century with his wife and childhood sweetheart, Joanne, runs to 30,000 volumes, she said.

“He was an extremely important advocate for Indigenous communities at a time when it was not something at the top of everyone’s agenda,” O’Neill said. “This is the 1980s — a generation before many other museums.”

The couple had two children, Christine and Grant Rice MacDonald, and one granddaughter. A noted scholar herself, Joanne died in 2018.

A memorial service will be held later this spring at the Museum of History, Doherty MacDonald said.